Kemetic Yoga offers another perspective on the history and tradition of yoga. Shine a light on the wall of an Egyptian temple and you’ll find images of goddesses and pharaohs contorted into interesting and beautiful poses. Yoga poses. Born out of the African nation of Egypt. As we celebrate diversity and practice inclusion, it’s fitting that we look at the Kemetic yoga system, resurrected in the 1970s by Dr. Asar Hapi and Master Yirser Ra Hotep (Elvrid Lawrence) of Chicago, IL. The system has grown in popularity, especially for African Americans looking to reconnect to their roots.

My Vinyasa Practice asked two, Kemetic Yoga certified, MVP students, to give us their insight into the practice. Let’s meet them!

Cynthia McCoy: “My Kemetic Yoga Teacher name is Basu Cynt. Basu is a title that is given to a certified Yoga teacher practicing the Thef Neterru Sema Paut, the Posture System of Egyptian Yoga. My instructor is Basu Asr Neter Aunkh Aakhu.

My physical fitness background includes dance and cheerleading.  I am a native Detroiter and at present I reside in the Atlanta, GA area. I am 62 years old, married and have 5 children, 1 daughter in-law and 1 granddaughter.

In addition to practicing Yoga, I am a member of the Edeliegba Senior Dance Ensemble and we perform throughout the Metro Atlanta area, presenting African dance, spiritual, hip hop, ballet, modern, tap, and Mediterranean dance pieces. I have a BA in Mass Communications/theater from the University of Detroit.  And I am a certified nurses assistant. Fashion/Costume Designer/Seamstress and teacher.

I am a certified Kemetic Yoga instructor teaching the Thef Sema Paut  or the Posture System of Egyptian Yoga. ” Julie F. Richards: “I live in Mercersburg, Pennsylvania – about 72 miles southwest of Harrisburg, the State capital. In the last census, African Americans only made up about 6.5% of the population here.

However, there is an area about 2 miles southwest of Mercersburg which used to be called Little Africa due to a large population of African Americans who settled there in the 1820s and built a vibrant community which existed during the time of the Underground Railroad.

I homeschool my two children; own a nutrition and fitness consulting business (sakilesnutritionandfitness.com); and teach group exercise classes, in several different formats, at a Wellness Center which is a 25-minute drive – through the Tuscarora Mountains – from where I live. One of my favorite quotations and my personal mantra comes from Stevie Wonder. It goes like this – “Fear can’t put dreams to sleep.

I am a Certified Kemetic Yoga Teacher at the 200-hour level. I recently completed my training with the YogaSkills School of Kemetic Yoga under the tutelage of Master Yirser Ra Hotep, the most senior instructor of Kemetic Yoga in this country.”

Cynthia describes Kemetic yoga as “…an ancient Afrakan form of yoga based on the culture of ancient Egypt; known as Kemet, Land of the Blacks.” And Julie goes on to explain that, “The original inhabitants of Egypt and Northeastern Africa were the Kemetic people, who built one of the oldest civilizations known to man.

They developed a philosophy and system which encompassed self-development of the body, the mind, and the spirit. In short, it is this system – which recognizes Africa as being the root of civilization, religion, and spirituality – that we call Kemetic or African Yoga. In terms of lineage, Dr. Asar Hapi and Master Yirser Ra Hotep are the Grandfather and Father, respectively, of Kemetic Yoga in America.”

Self-development was a big draw for Julie, she says, “Like many persons, my formal education occurred in a system which was largely Eurocentric in its worldview. Therefore, there has been much unlearning and re-education to do. Kemetic Yoga is a welcome and necessary continuation – or extension – of my further education in African World Studies as well as African and Caribbean Dance. It has created an opportunity for me to experience yoga as a healing art; to learn more about and connect meaningfully with my roots – as a person of African descent, and to become attuned to my non-physical self.” Cynthia shares that she is drawn to the practice because “…it was left for Black people by our ancestors.”

Cynthia loves the “Udja Ra: The Journey of Ra” posture while Julie enjoys a flow. “My favorite sequence in Kemetic Yoga is called Ma’at Ka. Flowing from one posture to the next during the practice of Ma’at Ka results in several major organs – including the lungs, the liver, the kidneys, and the heart – being oxygenated and energized. Symbolically, the sequence is also powerful for me, because it is associated with one of my favorite Kemetic divinities who is known as Ma’at, the Goddess of Law and Order. Having said that, I would recommend that one has a complete experience by taking a Kemetic Yoga class offered by a Certified Kemetic Yoga instructor.” Of course, many of us are curious about the similarities and differences between Kemetic and Indian yoga practices. Cynthia says that while some of the postures are the same, “One of the differences is that Indian postures are in Sanskrit.  The word yoga is derived from the Sanskrit root “yup” and means to “join” to “yoke”.

In the Kemetic tradition, the word Yoga or Sema or Smai Tawi, means the unification of the two lands. (Black Genius cometic Yoga Certification, Sasu Asr Neter Aunkh Aakhu)  In my opinion, The main difference is that Kemetic Yoga is practiced from an African perspective.” Julie adds, “There are several major differences between Kemetic Yoga and Indian Yoga.

I will mention three here. Firstly, the main poses in the Kemetic tradtion imitate the ancient Egyptian deities whose likenesses are depicted on the walls of the Egyptian temples and in the hieroglyphic texts; whereas in Indian Yoga the poses have various sources – for example, some were created by athletes, others for training in the militia, some are based on animal movements, and others might be based on ancient stories or myths. A second major difference is that there is only one type of Kemetic Yoga, whereas there are various styles of Indian Yoga.

The third difference is related to perspective. For people of African descent, Indian Yoga is representative of the ‘other’s’ culture. However, Kemetic Yoga is ‘ours’ in that it is curated to meet our specific needs. Transformation can occur through an African perspective – thereby making it culturally and spiritually relevant to the person of African descent, as well as more inclusive, more accessible, and more relatable than Indian Yoga might be.”

I now have a daily practice of 1 to 2 hours – which I would never have imagined could happen. My understanding of Indian Yoga philosophy has given me a better appreciation for how to use the Yamas and Niyamas to strengthen my practice both on and off the mat. I have been able to effectively apply the YogaSkills Method of Kemetic Yoga in the yoga classes that I teach and in my personal practice – whether I am teaching or practicing Indian Yoga or Kemetic Yoga. Finally, The practice has allowed me to connect to my heritage, my culture, and a community of yoga practitioners whose ‘stories’ more closely align with my experience as a person of color living in America.”

For both women, Kemetic yoga has had a beautiful impact on their lives. Cynthia tells us, “As a Black American woman, whose culture and origins have been stripped during slavery, I am always trying to connect with my culture.  Over the years I have studied and had a fascination with Egyptian History and physical fitness.

So in 2018, when I saw an invitation to study and become a certified Kemetic Yoga instructor I did not hesitate to register. Through my studies of Kemetic Yoga, I was able to connect to my African culture and practice a system of health and wellness that honors my ancient ancestors.” Julie expresses, “Kemetic Yoga opened the door to my becoming more intrigued than ever with the subtle effects that yoga has on the whole person. It has greatly supported my mental health.

For example, I am much calmer than I used to be, and the enhanced clarity of mind that the practices bring about has generally resulted in my making better decisions on all levels.” 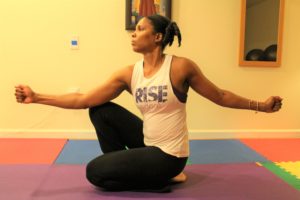 In this way, as we move through the various poses and postures of Kemetic Yoga, a state of unity between the mind and the senses while remaining conscious has already been achieved. Cynthia shares, “What surprised me about Kemetic Yoga is how empowered I feel as a Black woman.”

If you’re interested in learning more about Kemetic yoga, Cynthia recommends that you “Purchase “Egyptian Yoga” Posture of the Gods and Goddesses by Dr. Muata Ashby and Dr. Karen “Dja” Ashby. There are also Youtube videos on the subject.” Julie echoes this advice with, “I would recommend taking a Kemetic Yoga class, if possible. I would also suggest visiting the Kemetic Yoga website (kemeticyoga.com) for more information about the practice, class schedules, and to learn more about training and teacher certifications.